The San Martin titi monkey, whose current scientific name is Plecturocebus oenanthe, belongs to the commonly called titi monkeys, the most diverse group of primates with 34 described species (Byrne et al., 2016). It was first described in 1924 by Thomas, thanks to specimens collected in Moyobamba at 823 m altitude. This specimen is currently in the British Museum. After this finding and until 2003, the only places where the presence of P. oenanthe had been registered were Yuracyacu and Río Seco, both in the Alto Mayo Valley.

The species was recognized by Hershkovitz (1990) and Groves (2001) under the name Callicebus oenanthe. However, recent molecular studies split the diverse genus Callicebus into three genera: Plecturocebus, Cheracebus and Callicebus. The new genus Plecturocebus consists of the former donacophilus and moloch Groups (Hershkovitz, 1990). According to this new arrangements, oenanthe belongs to the genus Plecturocebus, just like some other Peruvian species of titi monkeys (P. discolor, P. cupreus, P. urubambensis and P. toppini), and is closely related to other brownish species distributed in southern Brazil, Bolivia and Paraguay.

The results of extensive studied conducted by Proyecto Mono Tocón show that the distribution range of P. oenanthe covers the Alto Mayo, Bajo Mayo and Huallaga Central subregions of the San Martin Region. The distribution range seems to be bordered in the south, west and north by mountain ranges, and in the east by the Huallaga River. It is difficult to explain why the species has not dispersed eastwards near Tarapoto, as there is continuous lowland forest, up to the Marañon River and no obvious geographical barriers can be detected. It is possible that the presence of the white-browed titi monkey, P. discolor, in that area has prevented further dispersion of P. oenanthe. If the San Martin titi monkey somehow cannot compete with P. discolor, then this could explain why its range on the eastern side of the Huallaga is restricted to a very small enclave population. 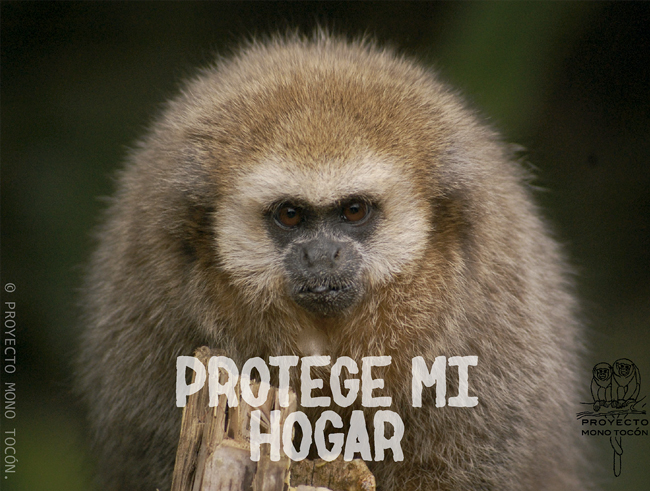